Philip Hammond faced fresh calls to overhaul stamp duty last night as figures suggested reforms to the levy will cost the public purse up to £4billion by 2023.

MPs, campaigners and experts said the ‘broken’ tax was putting off families from moving up the property ladder and making it more expensive for the elderly to downsize.

The row centres on a decision by former chancellor George Osborne to raise the levy on homes worth more than £937,500. The hike is seen as a major factor in the slowdown in the housing market.

New figures published alongside the Budget yesterday showed the extent to which the reforms are expected to hit tax revenues.

The Office for Budget Responsibility predicts stamp duty receipts will be £3.8billion lower than previously thought from 2018 to 2023. 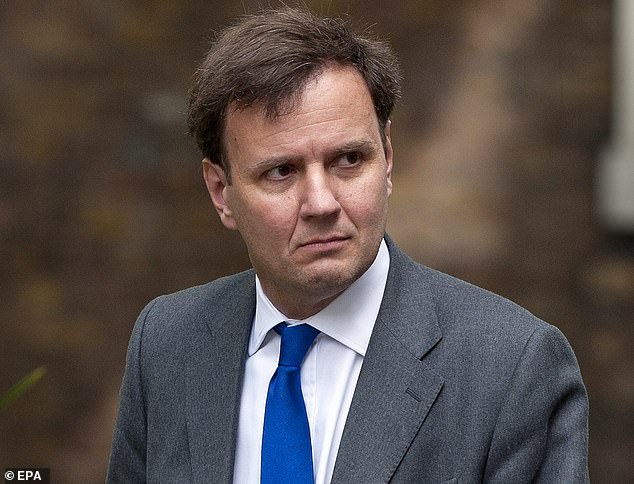 And they will fall from £13.6billion last year to £12.8billion this year – suggesting Mr Osborne’s reforms have backfired.

‘Stamp duty is a tax on mobility and makes it harder for people to move,’ said Tory MP Greg Hands, a former Treasury minister. ‘The fact the Treasury is now also getting less revenue means it needs to be seriously looked at.’

Mr Hammond has scrapped stamp duty for first-time buyers on homes under £300,000 and for shared ownership homes worth less than £500,000.

But critics last night dismissed the Chancellor’s changes as ‘tinkering around the edges’ and called for the duty to be completely overhauled or scrapped.

John Stevenson, another Tory MP who has campaigned on the issue, said: ‘The stamp duty system is in desperate need of change.

'One way of doing that would be for sellers rather than first-time buyers to pay, which would at least mean less of the burden fell on people trying to move up the housing ladder.’

The levy is expected to rise again in subsequent years, as house prices increase, but by less than previously thought as people move less.

Experts say the duty is partly to blame for the slowdown in the housing market, with a report by Barclays Mortgages today finding that 54 per cent of homeowners would now rather improve their property than move. 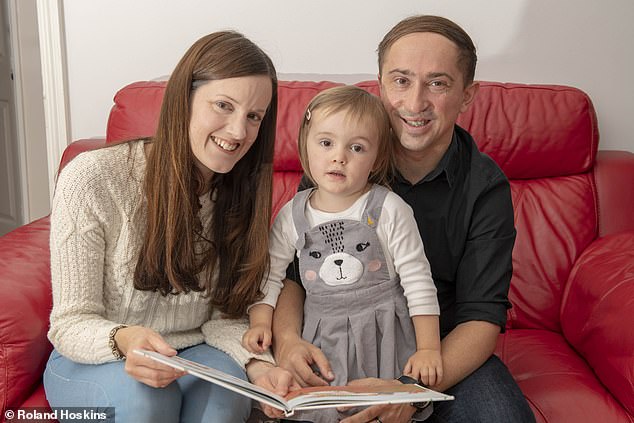 Rachel and Steve Mills with their two-year-old daughter Rosemary, From Ealing, west London

Stuart Adam, of the Institute for Fiscal Studies, said: ‘Stamp duty is a tax that bites every time a property is bought and sold. It gums up the market by discouraging transactions and is a particularly bad way of taxing property.’

Mr Osborne’s changes have been particularly felt in the South East and London. It is also feared that uncertainty over the outlook for Brexit may be causing buyers of expensive homes to delay.

Last night a Treasury spokesman said: ‘Housing market activity is affected by a wide variety of factors, of which stamp duty land tax is just one.

‘Thanks to reforms introduced at yesterday’s Budget, all first-time buyers of shared ownership properties worth up to £500,000 will now be able to take advantage of first-time buyers’ relief.’

The number of property transactions in England in the first six months of this year was 1.2 per cent lower than in 2017, official figures show.

Luke Murphy, of the Institute for Public Policy Research, said: ‘Stamp duty is an example of a bad tax. It acts as a barrier to those that want to buy their first home and generally discourages the selling and buying of property, reducing the incentives for people to move home.

‘We have called for stamp duty to be replaced by a more progressive annual property tax which would be simpler and fairer.

‘It would also make the housing market more efficient.'

We want to move but £27k levy is too much

Rachel and Ste Mills are desperate to trade in their two-bedroom flat for a larger home.

Their property in Ealing, west London, is just big enough for the couple and their two-year-old daughter, Rosemary, who sleeps in a box room.

But difficulties arise when relatives stay over – forcing them to use the sofa or an airbed.

The couple would like a three-bedroom house in the same area, to stay close to friends and Mr Mills’s job at Sky Sports. But this would cost around £750,000 with a £27,500 stamp duty bill on top of that.

Mrs Mills hoped for measures to help families to buy their second home in Philip Hammond’s Budget on Monday but was disappointed. 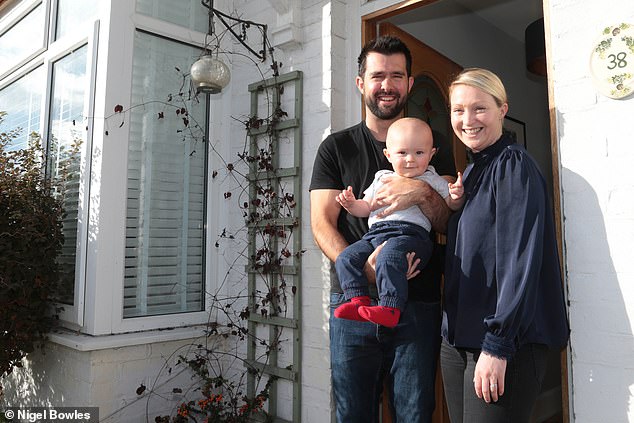 Hannah Ashley and Tom Adams with their ten month old son Archie at home in Hove East Sussex. The couple pay £600 a month for two days a week child care

She said: ‘There needs to be more support for families looking to move up the property ladder. We’re not looking to buy a mansion, just a three-bedroom home.

‘It’s really hard because you have to save up for a deposit and all the other costs, like moving itself, and then you have to basically pay another deposit on top of that in stamp duty.

‘Ideally we would like to move sooner rather than later. We want to start expanding our family and there’s just no space here.

‘We don’t have space to put a bed in my daughter’s room, neither our room. It’s really affecting us.’

She added: ‘We have no choice but to save up for the stamp duty. It’ll take us years.’

Staying put is out only option

Hannah Ashley, 33, and Tom Adams, 37, plan to move from their three-bedroom home to a better school catchment area for their ten-month-old son Archie.

But with high stamp duty charges the couple fear they will not be able to buy a property in the right area. Miss Ashley said she was also concerned because the pair hope to have another baby soon.

‘We live at the back end of Hove and all of the good schools are outside our catchment area,’ added the digital marketing agency worker. ‘We love our home but we do have only a teeny, tiny patio and we would love a proper garden.’

‘It’s horrendous,’ said Miss Ashley. ‘We’re already feeling the pinch with things like childcare costs. If nothing changes with stamp duty, we’ll have to stay here.

‘Stamp duty was supposed to be for the well-off. We’re an ordinary family and we just want to move into a reasonable home.’

ALEX BRUMMER: Stamp duty hike on Britain's most expensive homes has been an un-mitigated disaster

By pushing up stamp duty on the most expensive homes, the Tory effort to calm the surge in house prices and raise money for the Exchequer has failed spectacularly.

Instead of providing a new stream of income, as former Chancellor George Osborne hoped when he introduced the measure in 2014, it has led to a slump in transactions and deprived the Government of much needed resources.

And significantly it has created a huge blockage in the housing market, particularly in London and the South-East, preventing the strivers – highlighted by Philip Hammond in his feel-good budget – from climbing the housing ladder.

Figures from the Office for Budget Responsibility, released with Monday’s Budget, show how raising the tax on house sales is a huge drag on the public finances and economy. In the current financial year, the stamp duty income is forecast to fall from £13.6bn in 2017 to £12.8bn as home sales have collapsed.

Indeed, with stamp duty on the most expensive homes so prohibitively costly, the Treasury’s revenue on home deals is predicted to decline in each of the next five years. Another £1bn of receipts is set to go missing in 2019-20 alone.

Yet in spite of the appalling impact of higher stamp duty on the sale of homes for more than £937,000 – which starts at an eye-watering ten per cent of the sale – it has become a tax which the Government is scared to lower or abolish.

Downing Street fears that meddling with the iniquitous charges imposed on higher price homes will open a new line of attack from Labour, which is seeking to paint the Conservatives as supporters only of the rich and privileged.

Both were avid believers in a well-proven economic theory which says that when marginal tax rates are too high, revenues will subside.

To be fair to Osborne, he recognised this when he scythed Labour’s top rate of income tax from 50 per cent to 45 per cent – a policy which the current Labour leadership is perversely threatening to reverse.

A study by the Treasury found that far from cutting revenues, the reduction in the top rate of income tax actually encouraged tax-avoiders back into the system and proved to be an incentive for highly skilled individuals to stay in the UK rather than seek work in low-tax countries. This effect has been seen even more dramatically as a result of the cut in corporation tax, which is the main levy paid by companies on their profits.

Corporation tax stood at a hefty 28 per cent when the Coalition came to office and has since been cut to 19 per cent, with an intention to lower it to 17 per cent in future years.

The cut in the tax rate has led to an enormous £18.5billion jump in revenues as a result of investment in Britain by overseas firms and the fact that British-based companies no longer engage to the same extent in tax-avoiding strategies.

Taxes at this level have brought the upper-end of the housing market to a shuddering halt. That might be seen as a good thing in a market where some regard prices as over-inflated.

What it means, however, is families aspiring to a bigger home have found it cheaper to extend where they live.

As a result, people in starter homes or apartments below this level cannot move up the scale and an iniquitous deadlock has been created because of a perverse interference in a free market. The result is a moribund housing market and a gaping great hole in tax revenues.

There is also an impact on the nation’s output. House purchases are the biggest outlay for most of Middle Britain. When people buy new homes they also seek new kitchen equipment, soft furnishings, sofas, beds and much else – driving consumption, the service economy and manufacturing.

The high rate of stamp duty on more expensive homes has been an unmitigated disaster. Philip Hammond should stand up to the Left-wing bullies – and abolish it before it does even more damage to the nation’s prosperity.

The comments below have been moderated in advance.

The views expressed in the contents above are those of our users and do not necessarily reflect the views of MailOnline.

By posting your comment you agree to our house rules.