The 2015 Channel 4 TV series From Russia with Cash was both a gift and a handicap for the government’s attempts to persuade estate agents that they are on the front line of the war against money laundering.

On the one hand it dramatically highlighted the challenges that estate agents face when dealing with buyers and sellers of property. But on the other it gave the impression money laundering was a phenomenon restricted to London’s premium, foreigner-focused investment market. Simon York, Director of HMRC’s Fraud Investigation Service, is keen to dispel this myth.

Money laundering fuels human trafficking, drug trafficking, child exploitation and a host of other things which really bring misery to people and communities in the UK . Simon York, HMRC.

“Big estate agents in London do experience higher levels of risk but I think sometimes smaller businesses are seen as soft targets by criminals because they think they might have less sophisticated processes that they can exploit,” he says.

“People bringing in hundreds of millions of pounds into the UK to launder might consider prime London properties, but equally drug dealers or tax evaders in other parts of the country will be interested in local, smaller properties. Just because you’re a smaller or regional estate agent doesn’t mean you’re not in the firing line.” 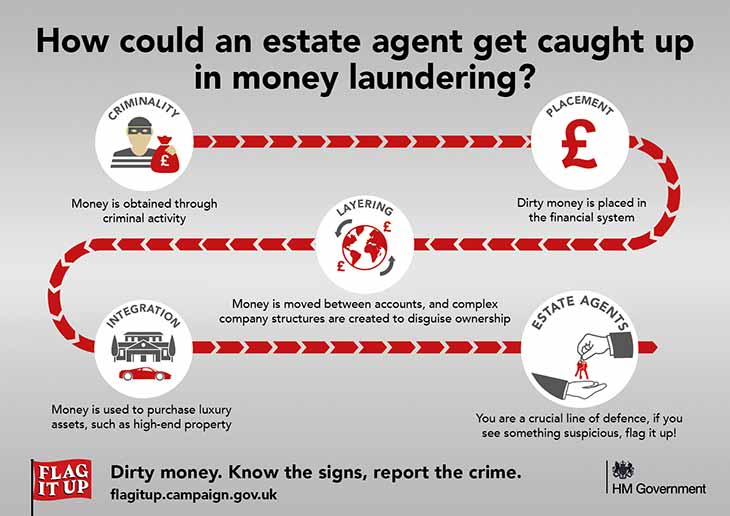 All agents must be vigilant. Criminals are becoming more sophisticated, both in the way they launder money through assets like property, and their ability to move money internationally. If agents suspect that money laundering may be taking place, they must submit a Suspicious Activity Report to the National Crime Agency. Additionally, estate agency businesses have a responsibility to register with HMRC for anti-money laundering supervision.

HMRC has been busy employing its 4,000-strong investigations team to ensure money launderers feel the heat. Last year, the tax authority secured more than £31 million under the Proceeds of Crime Act and successfully prosecuted 18 individuals for money laundering offences and failures to follow regulations.

Over the last three years, it has carried out some 5,000 anti-money laundering interventions across the range of sectors it supervises and last year levied 655 penalties totalling £2.3 million. HMRC treats agents differently depending on how they are – or could be – involved in money laundering cases. This includes:

“As a professional body we play an important role in ensuring our estate agent members are educated and equipped to put in place adequate procedures to safeguard against risks,” says Mark Hayward, Chief Executive of the NAEA Propertymark. “Estate agents must constantly consider the level of identification, verification and monitoring needed to check for money laundering. Taking steps to identify customers is key and where agents identify suspicious activity they must report it.”