The vastness of the Phones4u tycoon’s second home, which he bought for £87m in 2012, has an oddly distorting effect. Standing at the bottom of the gleaming white marble staircase, staring up at five crystal chandeliers, I feel nauseous and keenly aware of my own insignificance in the universe, like someone who has accidentally drunk ayahuasca on holiday in Mexico.

Acquired from a Channel Island trust that was linked to Jefri Bolkiah, younger brother of the Sultan of Brunei, Mayfair House is a sprawling, slightly weathered Portland stone building. Outwardly indistinguishable from the many Middle Eastern banks and embassies that surround it, few would guess that it is now one of the most valuable homes in Britain — estimated to be worth £250m.

When he first bought the property, Caudwell, now 67, entertained lavishly in it for a couple of years. Then, like Willy Wonka closing his chocolate factory, the billionaire announced he was embarking on a top-to-bottom renovation that would transform the house into “something so much more beautiful” — and take it away from public view for years. “It was very gold,” he says, by way of explanation. “There was probably enough gold to populate Fort Knox.”

Waiting for the full tour, I was asked to sit in a wood-panelled room surrounded by eccentric dinner jackets: Caudwell’s jackets, in fact, in all their sequined glory, lit up in frames or modelled by faceless mannequins.

And for all the opulence, this is not even his main residence. Caudwell wants to throw charity balls and hold business meetings here, primarily for Caudwell Children, an organisation he founded 20 years ago to provide support for disabled children and their families. He says it was the 120-capacity ballroom that swung it for him.

“I just thought how magnificent it would be for gala evenings,” Caudwell says. “It was so unique that it really did excite me, mainly from a charitable perspective, because I don’t need a house anything like that size.”

In fact, it’s two houses knocked into one, with 15 bedrooms and eight floors. At one point, 300 people were working on the renovation and the ballroom was used as a canteen. Both houses had to be supported on 40ft pillars while the basement was dug out. Seventy-eight miles of cabling has been laid to power modern luxuries such as underfloor heating and a quilted, soundproofed cinema room decorated with black-and-white photographs of Hollywood stars with the faces of Caudwell’s family superimposed.

Caudwell wanted the house to be as energy efficient as possible, so he installed ground-source heat pumps to warm the house using geothermal energy. Down below, there’s a custom-built car stacker that stores vehicles vertically and can take eight at a time — Caudwell collects vintage cars — from street level to storage at the click of a button. All of these systems can be shut off by one main switch in the master bedroom. 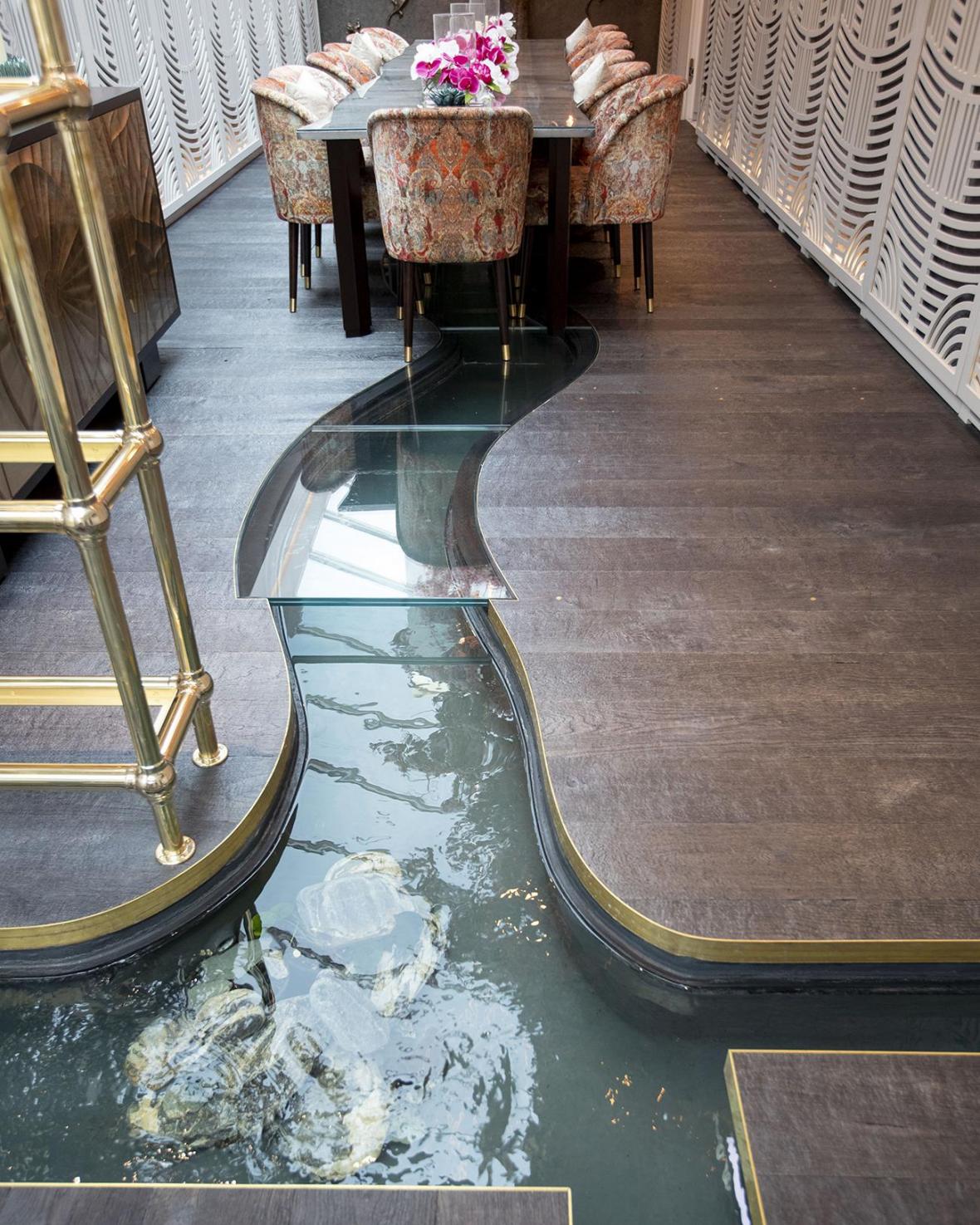 An indoor river, stocked with tropical fish, stretches from an artificial cherry tree and flows beneath the table in the Thai-themed dining room
VICKI COUCHMAN

“It really has been a labour of love. I was involved in absolutely every aspect of it,” Caudwell says, adding that he spent “years” planning what went where. He seems pleased with his reputation as a hard taskmaster. “I think that’s absolutely fair, but why wouldn’t you be? When you’re trying to achieve something significant, you need to have a high standard and maintain it in order to get the best result.”

Caudwell, who looks like Heston Blumenthal wearing Elton John’s blazers, is not your typical billionaire; in fact, he hates the term. “I think it takes away all the substance of somebody’s life. It’s not a title that holds any importance; it’s what you do with the money that counts.”

Caudwell is the 97th richest person in the UK, according to The Sunday Times Rich List, and he’s worth £1.576bn. He grew up on a council estate in Stoke-on-Trent and sold second-hand cars before he set up Phones4u in 1996 — a company he sold for almost £1.5bn a decade later. Caudwell and many members of his family have been diagnosed with Lyme disease, and it’s one of the many causes he supports. A committed philanthropist, one of his missions in life is to encourage wealthy people to give their money away. 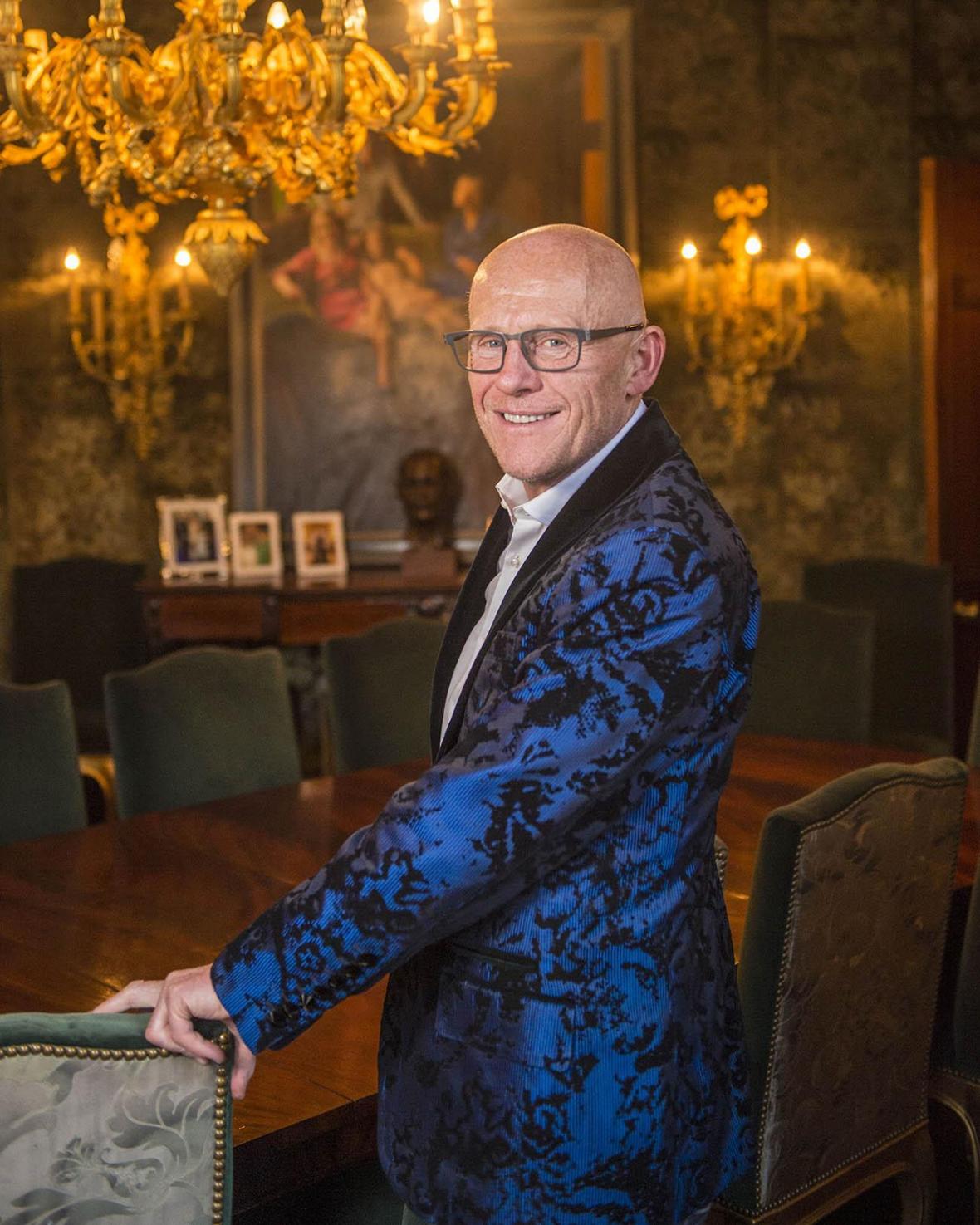 “There’s a really important point here I’d like you to get across,” he says sombrely. “The rich-poor divide in society is really quite disgusting. It’s very difficult to justify people with billions of pounds when there are people all around the world starving to death and living in extraordinary poverty.”

It is quite something to be lectured by a billionaire on wealth inequality while you’re still slightly sweaty from sitting in their private sauna. Perhaps I should have cooled off in the icy plunge pool, or sat under the snow shower afterwards. Both are in the basement spa, with the obligatory indoor pool and a cracking volcanic installation that lights the space up with a soft lava glow. Caudwell trains every day and goes on long bike rides with his 36-year-old girlfriend, Modesta Vzesniauskaite, a former Olympic road cyclist.

When it comes to giving, Caudwell certainly talks the talk. He’s promised to give away 70% of his fortune, and he’s even considering upping that to 90%. “Leaving a billion pounds to your children is never going to be a good thing,” he says. “It’s going to reduce their motivation in life — kids need to be hungry and make their own success.”

When they grow up, they too can create a Thai-themed dining room (it’s his favourite cuisine, and he makes a mean green curry) where diners have to hop around an indoor river.The water has to be kept at exactly 23C to keep the African cichlids happy. “There’s a lot more fish to go in there yet,” he says. “The whole thing is on trial to make sure it’s stable and the fish are healthy. They look like they’re doing really well, so soon I can put another 500 in and it will really start to come alive.” The waterway meanders out from a faux cherry tree that spreads its lifelike pink blossoms all over the ceiling.

Each floor is connected by a gleaming white staircase of solid marble, or an art deco lattice-fronted lift. For more informal affairs, there’s a cocktail lounge with low-lit velvet booths, a stage for live music and an adjoining pool room with a rose-covered ceiling. There’s also some pretty garish artwork: a full-size naked bronze couple with some anatomical surprises proudly occupy one corner of the lounge. I had no idea who they were, and nor did anyone else I asked. 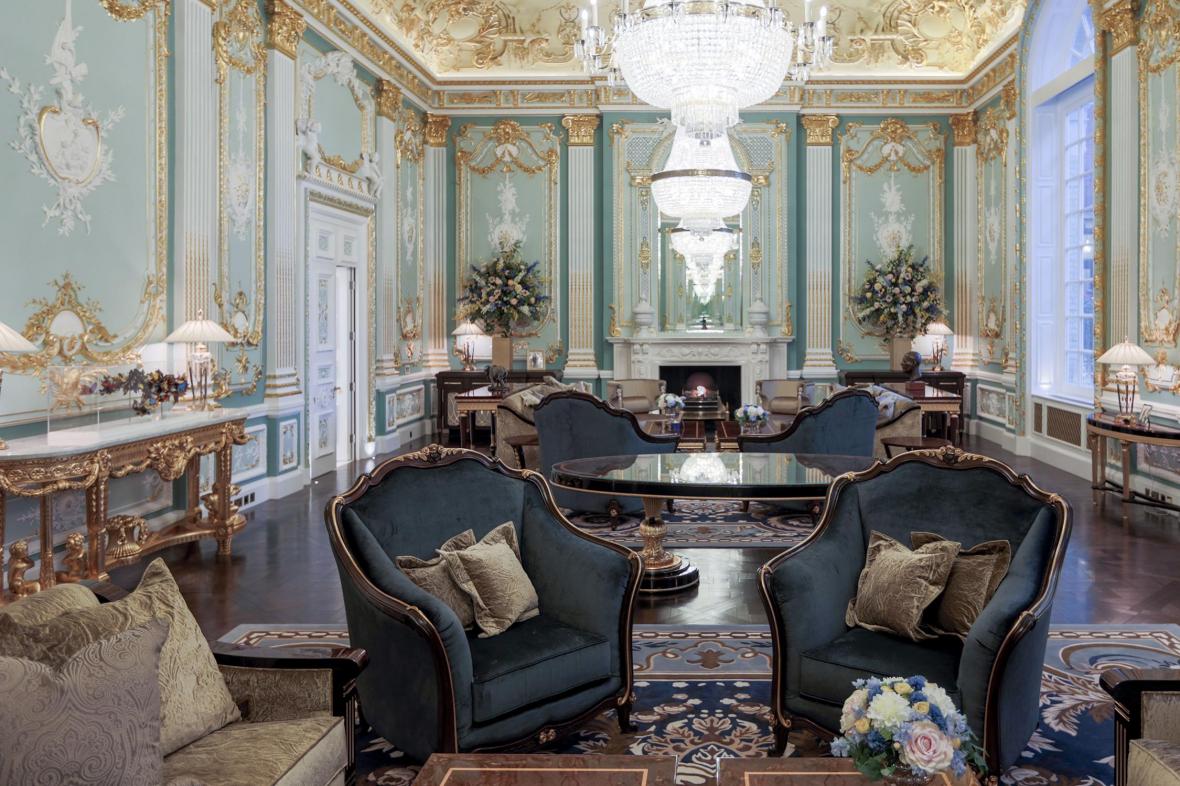 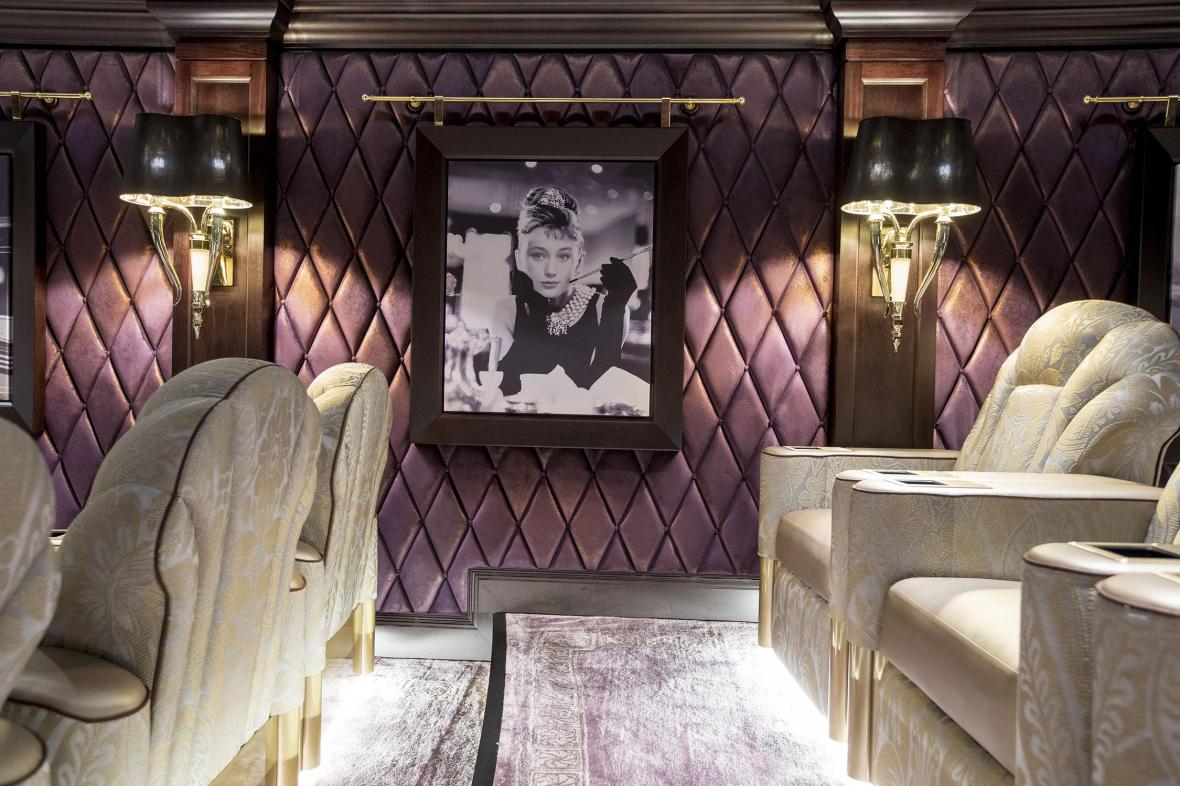 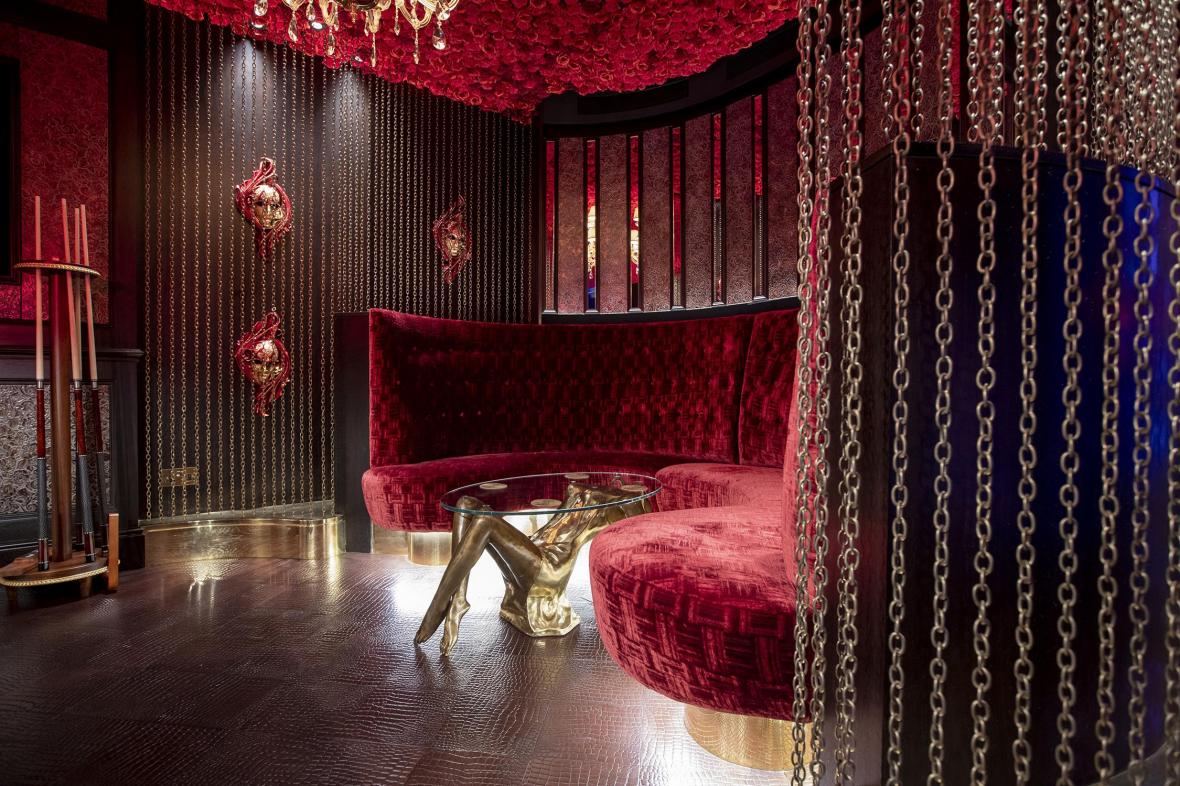 Intricate security arrangements and full-time staff are employed to protect the house from burglars, but Caudwell claims he hasn’t owned any expensive jewellery or art since his main residence in Staffordshire was burgled nine years ago. “The value in my house is the house itself, but I don’t keep any valuables. You can’t steal a marble staircase.”

Over schedule and budget, the total cost of the refurbishment was £65m, which raises the question: do wealthy people really need to be schmoozed in a mansion to persuade them to give to charity? Couldn’t Caudwell have just given that money straight to the needy children?

“No, that’s tunnel vision,” he says. “The house itself is a profitable venture. Far from taking away my ability to give to charity, it increases it because it has increased my wealth significantly. As 70% of that is going to charity... it swells my ability to give during and after my lifetime.”

Britain’s Most Expensive Home: Building for a Billionaire is on Channel 4 on Wednesday at 9pm

● The house has 15 bedrooms over eight floors; three of those floors are underground.

● There are 650 electrical sockets.

● Builders installed 78 miles of cables — enough to stretch from London to Salisbury. 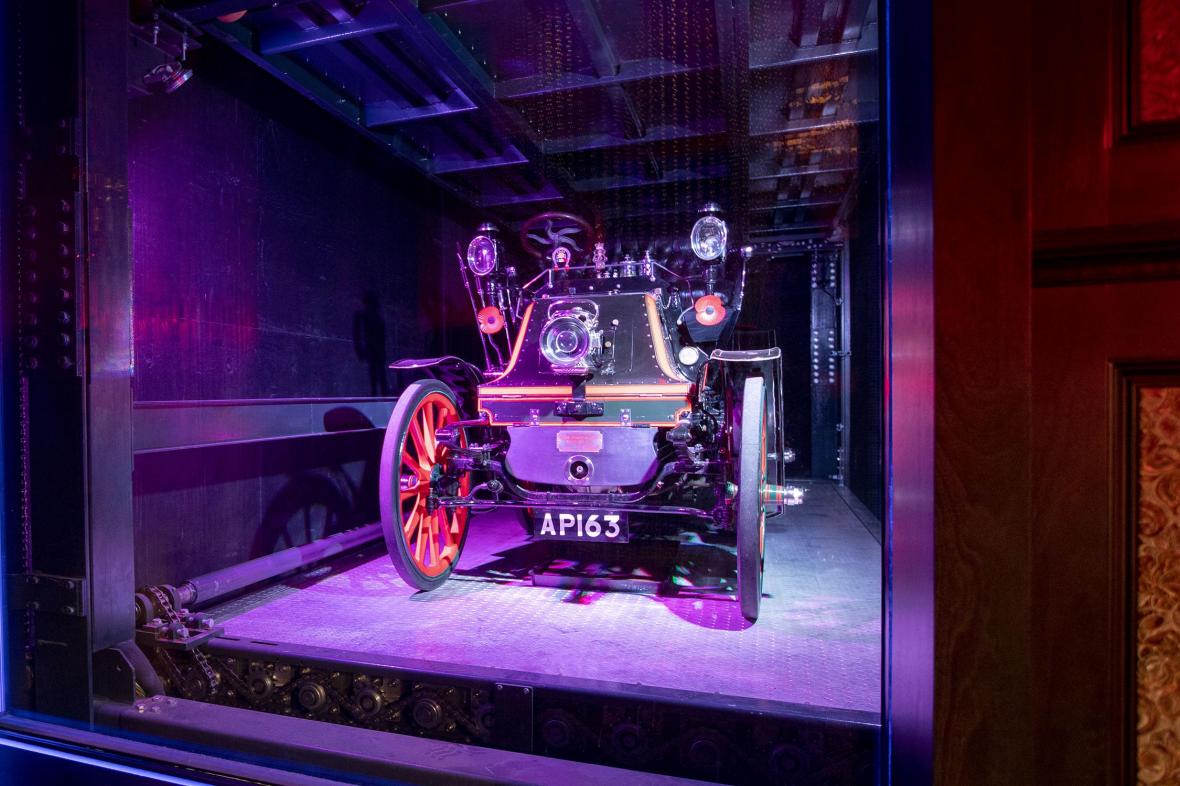 ● Eight cars can fit inside the custom-built underground car stacker.

● The river in the dining room is 42cm deep; the water temperature has to be maintained at 23C; Caudwell hand-picked African cichlid fish to live in it.

● The ballroom has the capacity to host 120 people for events and it is roughly the size of the average four-bedroom house in the UK.

● At one point, 300 people were working on the renovation and the ballroom was used as a canteen.